I'm actually with Tobold on this one. Hope for the best, but don't really expect it.

That said, the "dungeon romp" on the destroyer sounded very interesting. Perhaps I'm underestimating. Or perhaps this is simply a WAY too early hype-fest. The game's not expected until 2011 at the earliest, IIRC.

Didn't do much with my gaming last night. I generally don't play much, if at all on weekdays -- I have a nearly 2 hour commute each way on top of the 10 hour workday, so I leave at 5:00 am and get home around 7, making bedtime at 10-ish. Between dinner, spending time with the family, etc, there often isn't time for gaming in the evening.

That said, I finally ferried my EVE character back to my home base from the market hub, as well as set my queue for the next Electronic skill I'm "finishing" at level 4. According to EFT I've only got 15 days left to round out the section, but since they're "non-critical" skills it's tempting to train other things. I've decided to discipline myself to simply finish them now, and then never have to worry about them again. 2 weeks in EVE isn't a long time at all. Kinda odd how the perspective shifts -- when I 1st started EVE, even a 3 hour skill bugged me, but now I think of 2 weeks as "not long." What's it going to be like when I eventually am working on capital ships? Only time will tell.

Anyway, after ferrying my hauler (and some new purchases -- Sabre anyone?) back to my home base, I logged out of EVE and finished several quests in EQ2 on my dirge. I had them within an inch of completion, so I found the final few mobs I needed and turned them in. Got a bit of adventure xp and almost a complete AA point. Just have 1 more quest hub to finish up the Kylong Plains and then it will be time to move on the the Fens.

Total time online. . . less than an hour. Not bad for that short a time. Doubt I'll be on tonight, though -- my son has day camp tomorrow, so tonight will be making his lunch, making sure he's got his stuff packed for it, etc.

And since I'm new to this blogging thing, I'm gonna experiment with adding a picture or 2 to this thing now. Whoope-de-freaking-do, n'est-ce pas? 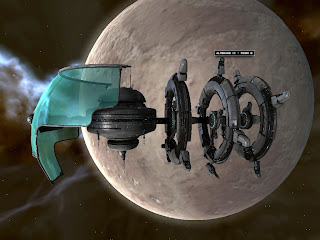 And now you see a nice EVE station off to the left. Not quite where I envisioned it, but I suppose that as I play with things I'll get things better squared away.
Posted by Magson at 3:16 PM