Back when I was at Ricks College, there was a guy named Daryn with whom I became friends. In a "small world" coincidence, I ran into him in Aurora, CO several months later since I'd been called to the Denver mission, and he was temporarily serving there while waiting for his visa to go to the San Fernando, Phillipines mission.

Why this backstory? Becuz he directed a film, that's why! Here's the trailer:

I think it looks cute, and I'll admit to having had a crush on Alyssa Milano ever since "Who's the Boss?" back in the 80's. I look forward to seeing it in order to support my old friend, even if I haven't seen him in a very long time.
Posted by Magson at 3:53 PM 2 comments:

Ever since Gwen's been able to "army crawl" she more or less stopped rolling around, but today she decided it was a fun way to play, so I got the camera out and took this video:

Gwen had her 9 month doctor visit last week. She's now 18.0 lbs, and 28 inches tall. This puts her at the 75th percentile for her height and 35th for her weight, meaning she's tall and skinny. She was "short" when she was born, so she's been outpacing that growth curve, but as far as weight goes she's been consistently on the 35th percentile line.

In other news, she is loving solid food. It's hard to even snack on anything without her crawling over and begging for a taste. She loves the vegetable baby foods, but so far hasn't been too keen on any of the fruits. She enjoys the Gerber Graduates and also loves bread. Don't worry, we only give her little bites so she won't choke, but she'll go through a complete slice of bread in a single sitting, as well as some nibbles of string cheese and a half a tub of baby food to boot. And yeah, she'll chase it down with 2 oz. of her bottle on top of that.

Funny thing about her crawling is that while she can crawl up on her hands and knees, she generally only does it in her crib or when she's reaching up to the furniture to pull herself up, but otherwise prefers the "army crawl" on her elbows/forearms. And yeah, she cruises the furniture too, albeit slowly. 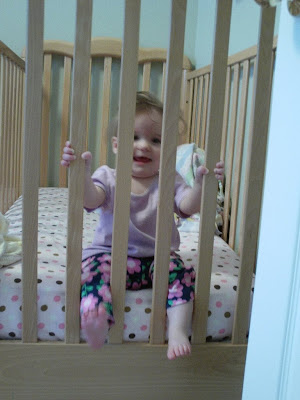 She's finally fully cut a tooth to boot. We can see 3 other teeth hanging in her gums, and she's had teeth pop out then go back up before, but this one's staying out for sure this time. She likes to reach into her mouth to feel it with her thumbnail.

And another big milestone is that last night she slept for a 7-hour stretch, which is her record for longest ever single sleeping period. Her prior record is about 5 hours, which she's only ever done once. A typical night still sees her up about every 2-2.5 hours. Hopefully the long stretch last night is an indication of good things to come. She had a good nap this morning as well and finally doesn't have dark circles under her eyes anymore.

Hopefully this picture of her in "jail" is cute enough to accompany this post ;)
Posted by Magson at 4:46 PM 1 comment:

Yeah, I know. . I don't update. Bad me and all that. I just don't often feel the urge to write anything here.

But, we've been able to make a few videos of Gwen the past day or so and I thought I'd share them.