Servers and whitelists and vidcards, oh my!

Work's been interesting the past couple of days. The batch of PC's that we use here on the service desk all came with refurbished FireGL 7200 ATI video cards. And they all run hot. And they all fail, and rather spectacularly when they do. And when Dell sends replacements, they don't always work either, since they're refurbished too.

This weekend was apparently my computer's turn to futz out. It's had some difficulties since I've been using it, but the occasional reboot and avoiding watching wmv files in the media player made it easy enough to not have trouble..... but the AC went out over the weekend, so it was over 90 degrees in here when we got in on Monday, and my vidcard was already more or less fried as a result.

We got a 7600 a few months ago for a different pc, but it's still sitting on the workbench since it didn't really work there. We popped that into mine to see if maybe that pc didn't like it or something, but since it's a different card I hadda get the new drivers for it from the ATI website. Installed those and got a lovely BSOD saying that my video drivers were caught in an infinite loop. Boot to safe mode, revert the driver and blah blah blah. It owuld run on an older driver, but no matter which driver I had on the machine it had nasty vertial green bars at all times, sometimes sideways line of pixellation, often random patterns of green dots in the background. Meh. I put the old card back in, and while it worked at 1st, once it heated up it began locking up.

On the bright side, I managed to get Dell's online customer service to agree to ship a replacement card. We have to do it that way in order to have a transcript of the interaction with Dell, in case you wonder. But my pc was still unusable, usually locking up while still "applying computer settings" during the boot process.

So.... off I went digging on the shelf and found an old vidcard with a DVI and a VGA output on it. another guy here said he used to use that card on his PC before we got the newer workstations with the 7200's.

Slapped that puppy in, but again. . .no driver, and looking at the card itself it wasn't labeled in any way. Fortunately the basic driver allowed me to be able to use the pc to the point I could open a command prompt and enter the debugger to access the video memory so it would tell me what kind of card it was. ATI 300XT, in case you wonder.

so... off to download more drivers, this time ATI's "all in one legacy driver set." Oooooooooo. Once installed I was able to activate the vga port on it to allow myself use of 2 monitors again, at least. And I even have my old resolution back too, though it doesn't seem to like my background image anymore. Still and all.... makes the thing usable again until the new card arrives tomorrow.

And then my TL drops another pc from upstairs on me.. reporting the same problems, etc.

Yup, it's a bad FireGL7200 card again. We know it, but... have to do due dilligence on it. That machine now has the latest drivers, updated bios, etc. And it still gives a BSOD saying there's a problem with the card or its drivers any time I do anyhting remotely graphics intensive.

New card's on the way for that one now too.

The one on the workbench....since this is supposeldy a new card as of April, Dell won't send a replacement until we can test one of the "known good" new cards in that machine... nevermind that the same problems follow the card from machine to machine and it failed most of its video diagnostics. . . . . .

Print server's been up and down several times since last Thursday. always a nice call generator: "I can't print!"

Our whole business unit had lost internet connection this morning as well. Cause was found to be a DNS white list put into effect last night by the main office that blocked all of our external ports. Oops! They reverted to the old filters and are "investigating the issue" now. and obviously I have internet back or I wouldn't be posting this, no?

Haven't actually had too many "stupid stories" today. A couple of people too blind to see the box that says "click here to run the ActiveX control" that pops down from the toolbar, but other than that... mostly people complaining they can't print or access the internet. Gotta love MUI's, no?

Beyond that.... not too much to report from my gaming over the weekend becuz I didn't do much. I did get my dirge to level 73 in EQ2, but in EVE the missions I looked at getting from my agent were all crappy, so I just declined a long string of them. I'm really kinda killing time until I can go into a wormhole with a battlecruiser outfitted with hacking and codebreaking modules, and. . . .less than 2 hours to go on Survey 5 so that I can train Archaeology to use a codebreaker. I've been able to hack for a while, but never have actually done it before. In a couple of days I may have some wormhole stories to tell. I hope so, anyway. That sounds more exciting than mission running.

Okay, actually I did 1 more thing in EQ2, now that I think about it. Tipa at WestKarana.com posted about a nice "appearance only" armor from the Station Cash store in EQ2 and when I looked at it, I *had* to have it for my ShadowKnight. So yes, I finally popped my Station Cash cherry: 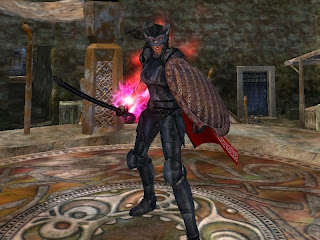 I'll admit that the nose hole in the helmet leaves me a little cold, but hey... that's what the /showhelm command is for, right? 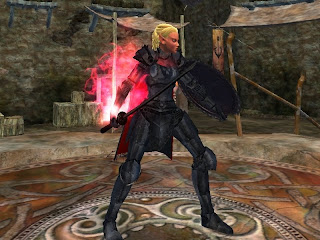 Yes, that *is* a High Elf SK. One of the 1st, actually -- created 4 or 5 days after the game launched. I like to try to break stereotypes here and there, and it seemed every high elf was going the "priest -> cleric -> templar" route at the time, so I broke the mold and made a fighter and then went evil. Admittedly, the character was initially intended to be a cleric, but once I hit level 3 and had to choose my archetype I decided I didn't want to be "normal." But then... who does?

I will admit, at level 19 I ran back through the (at the time REALLY scary) Nektulos Forest zone in order to be in Antonica when I dinged 20. I was tanking for a scarecrow grind group and when I hit 20 everyone thought I was going to be a paladin. As a result, the groupchat messages of "Gratz!" and all that quickly gave way to shocked cries of "SK? WTH?!?!?!?!?" That was a lot of fun, actually.

Wow - good thing I have a blog counter that tracks where people come from, or I would have no idea that you have entered blog world!

Now, maybe I should go read one of your posts. Looking forward to it...