Gwen's 1st Trip to the ER 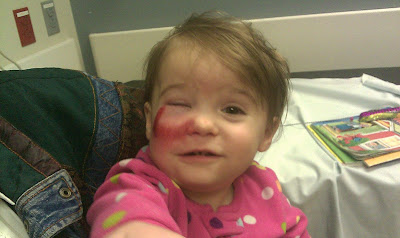 Gwen got to be moving too fast today and fell against some carpeted stairs. As you can see from the picture, her face swelled up something fierce, forcing her eye shut, and that's quite the rug burn too, isn't it?

We called her pediatrician and took her to the closest instacare and were told by both to take her to the ER at Primary Children's, so off we went to the U of U.

The biggest concern the docs had there was that she might have broken her cheek bone, so she had to have a CT scan. She didn't like it at all, but she held still enough that they were able to do the scan without needing to sedate her. Results were negative -- no broken bone. Whew!

The secondary concern was that she might have gotten rug burn on her eye as well as her cheek. They don't think so, but put some fluorescent dye in her eye to see. As you can probably guess, she didn't much care for that either. And her eye was too swollen shut for them to be able to tell, so we've got a follow-up visit with her pediatrician on Friday to check that.

Of tertiary concern is that she may have pooped her nose over a little, but we can't tell that until the swelling goes down. If it looks out of place after that, then we have a referral to an Ear, Nose, & Throat clinic to help with that.

Gwen handled it all rather well. It did take her a while to stop crying, of course, but she was smiling and laughing for the doctors in the ER just before they'd work on her and make her mad. She's asleep now and is lying on her side with the rug burn on the mattress, so it must not be hurting her right now, at least. We tried moving her onto her back, but she just pops back up on to her side.

All in all a very long evening.
Posted by Magson at 10:31 PM

Poor baby - and poor mom and dad for having to watch her in pain and get poked and prodded. Hope she recovers quickly and nothing is broken!